Funny story. I was at breakfast a few months back with a large group of friends and friends of friends. One friend of a friend was talking about how she was sitting around at a friend's house painting in her underwear because there was an easel. The conversation went something like this:

Me: "Laurel, can I borrow your easel?"
Laurel: "Why"
Me: "So she'll sit around our house in her underwear painting."
Laurel: *sigh* "Marc, you don't need those tricks to watch girls to sit around in their underwear. You're a photographer."
Me: "That's right!" *turns to Nell* "Want to do a photoshoot?"
Nell: "Are you serious?"
Me: "My card."

Anyway, here are some of the photos from the shoot we ended up doing. I did end up buying an easel for the photo shoot though as I thought it was a good image (though none of the shots with it in it made the final cut.) 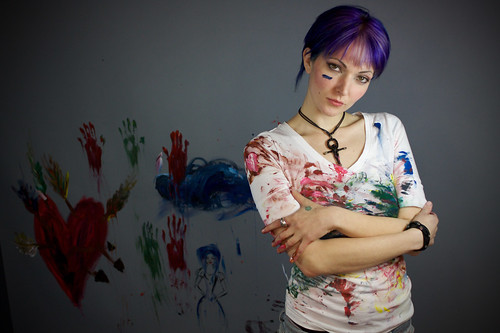