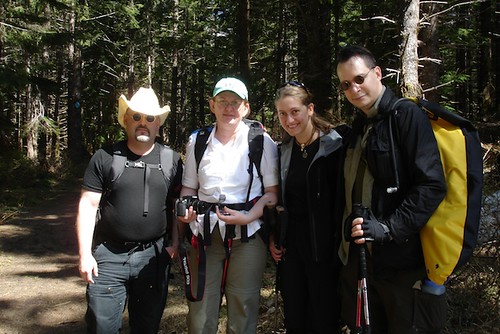 My best friend from high school, Cherise, Jason, and Anita made an attempt to scale Mt. St. Helens this weekend. We drove down to Kelso and stayed in a motel there and woke up the next morning, got breakfast and headed out. Due to various issues, we didn't make it to the trail head till 11 AM which is way too late even for the summer route. The winter route starts out over a thousand feet lower and is about two miles longer. In addition to that, it was still snow covered and we had switched to snow shoes within a few hundred yards of getting on the trail.

We climbed till about three or four and had lunch. We had talked to some rangers skiing down and pretty much figured out that it was out of the questions to get to the summit. It was still five hours at a good pace and with better (early morning) snow they said. Many of the people coming down off the mountain seemed to have camped as they had lots of gear and bed rolls with them. Others were skiing back, apparently having made it early and then skied down. From there we headed back down and to the car. We ate in Oly and made it back to Seattle by 10. The views were still wonderful from where we got to as it was above the tree line.

I think the way to go is to wait till climbers bivouac is open and most of the trail is free of snow but still plenty on the mountain. Camp there and get an early start. Then switch to snow shoes on the upper mountain. Then sled down. Conditions were good for this in late June last time I went. I might want to make another go at it this summer. 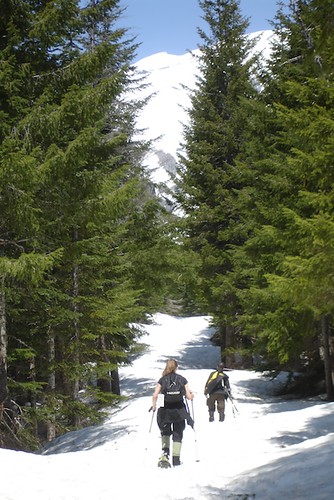